How to manage the status of your UI

Open the drop-down menu of the GUI corresponding to the colored circle, located at the bottom right of the user avatar, and select the desired status: 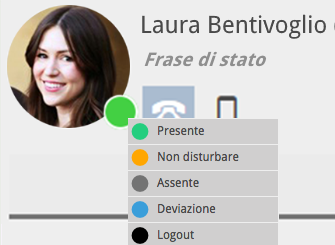 Difference between “absent” state and “do not disturb” state

The two states have a profoundly different behavior in the handling of calls by the PBX. Therefore, it is necessary to understand the difference between the two, especially when the call comes to a group of users.

The suggestion for users is therefore to use the DND setting when you are temporarily out of work and it is assumed that the user will be available again within a reasonable time in their work shift.

On the other hand, when you leave the workstation permanently (end of shift or long period of absence), it is advisable to use the Absent status, or turn off the GUI, but by activating the User setting “Set the absent status to logout”