Call routing – Selection of SIMs based on the number called

This guide shows you how to select for outgoing calls the desired SIM in a 2N Voice Blue Next gateway containing 2 or 4 SIMs. The “pre-selection” prefix method will be used, which is first added when dialing the user and then removed from the gateway before dialing the number to GSM / UMTS networks.

Before following this guide make sure that the firmware version is higher than version 1.20

This example guides you for a 2N VoiceBlue Next 2 SIM gateway, where we will choose the prefixes

First scenario: the user manually types the pre-selection prefix. It will be sufficient to set the two chosen prefixes in the LCR and route them to the 2N gateway which will do everything else:

In this scenario, it is necessary to route the normal recipient prefixes in the LCR and then intervene in the advanced rules of the manipulation gateway on the prefixes 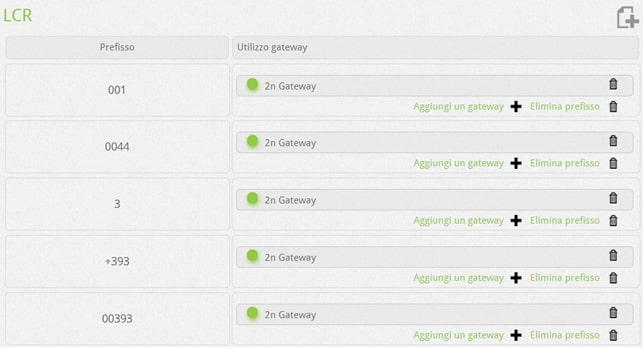 For example, to call the United States, the user will dial the number 001XXXXXX, which will be routed if I see the “2n Gateway” module / entity of the PBX. Here the prefix will be manipulated in the following way.

The other examples are similar except 00393, deliberately inserted as a special case.

This example applies to those cases in which mobile phone numbers have been stored in the phone book with the Italian international prefix 0039.

In this case we could behave exactly like the previous rules, and write the rule as 00393,, 88, but since we can avoid dialing 4 digits on the GSM, gaining the beauty of less than a second per call, we can remove the useless prefix Italian and hang only 88 on the number called. We will then write 00393.0039.88

It is understood that if you want to send out the calls for mobile phones 00393XXXXX on the GSM gateway, you need to route the prefix 00393 in the LCR to the gateway. The same applies if the prefix were written as +39, indeed in this case the elimination of the prefix is ​​a must due to the presence of the “+” symbol which may not work correctly when it reaches the gateway. We will therefore write + 393, + 39.88

Settings in the Gateway VoiceBlue Next

Gateway configuration / Prefixes menu – set different preset prefixes in each prefix list. Since in the example we are considering a 2-channel gateway, we will set only 2 prefix lists. Prefix list 1

NOTE: Avoid the settings shown on the side. “/” Is in fact an indeterminate character that allows you to skip the table of substituted prefixes. If there was a “/” in the first row of the table, the next row would not be evaluated and the beginning of the called number would be compared only with the table on the right. So if you enter 7 in the table on the right, the gateway will dial 77389456123 instead of 389456123 as we would like, causing the call to fail.

Gateway configuration / LCR Table menu – select where to route incoming / outgoing calls based on the list of prefixes; we will interconnect prefixes with outgoing groups (representing specific modules / SIM) First of all we need to add a new rule to the LCR table

Click Add and fill in Prefixlist 1 and GSM Group 1 (you don’t need to perform this step as this is one of the default default rules):

Click Add and fill in the Prefixlist 2 and GSM group 2 field:

Now everything is ready. Make a call to check the settings.