Each call shows information on date, time and duration and the name of the interlocutor (if stored in the contacts) and the telephone number. To call back the interlocutor, double click on the desired call.

New missed calls are marked with a colored dot to distinguish them from the others (dot off).

There is a field where you can enter a string for the targeted search of calls (a match is searched in the name string, to the left of the number in brackets: if the number is not registered in the phonebook, the search can be done by writing the number of phone).

In the list of missed calls, in addition to information on the calling number, the name of any ring group contacted also appears if the call was destined for the group to which you belong. This function is useful for checking under what title your extension was contacted, in cases where it belongs to more than one group.

In the scenario where you are part of a ringing group, it is important for members to be able to locate calls that were handled by other group members without their knowledge and those that were not handled at all (missed calls). In older versions, both types of calls are shown as missed calls.
In version 6.5 only calls that are not handled by any group member will be shown as missed. The others will not appear at all, except in the list of incoming calls of the GUI of the member who actually answered the call.

They indicate whether the message is preferred or not. Messages marked as favorites can be filtered by means of a faster search.

Finally, there is the possibility to choose between several voicemail boxes. The PBX administrator can in fact decide whether to make a user the administrator of a company voicemail (configured appropriately in the PBX). A drop-down menu allows you to select the mailboxes for which you are an administrator.

It is possible to right-click on each element of the call list and messages received in the voicemail to open a context menu containing the information available on the contact (the information is retrieved directly from the PBX contacts directory). If desired, this allows you to call the contact back quickly without accessing the phonebook or manually typing the number. 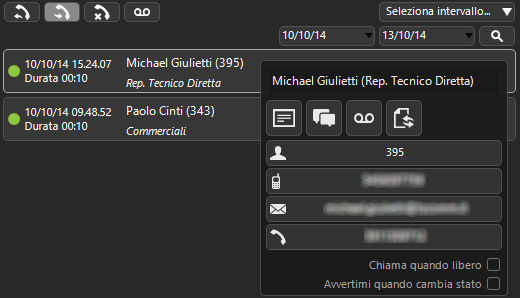