For some time, Telecom has been offering VoIP telephone contracts (on xDLS lines) providing the end customer with a router that emulates traditional lines. In the case of ISDN lines, it is likely that the router is not configured properly, with the consequence that it is not possible to make outgoing calls and the PBX returns an unreachable number message

Often the problem can be solved by setting a fixed exit number that coincides with the geographic number associated with the Telecom BRI interface.

The first thing to try is therefore to set the exit number of the gateway associated with the Mediatrix in the PBX. Set it to static, writing the output number in the box below equal to the number associated with the ISDN interface of the router (see following figure). 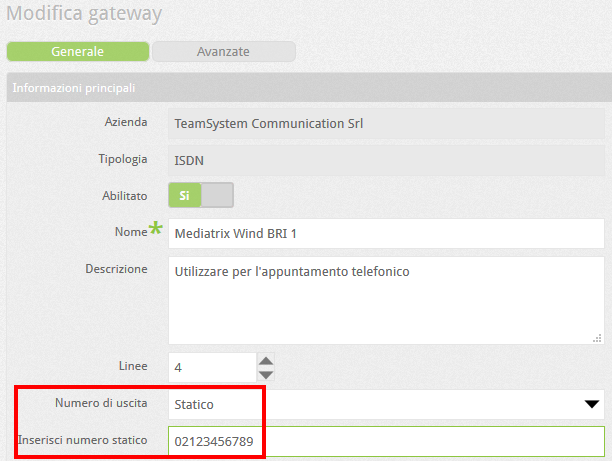 ATTENTION: we have observed that some OneAccess routers can reject outgoing calls even with forcing the exit number. This behavior can be caused by the fact that the router presents an incorrect calling number to the SIP trunk (in particular, it presents the company number twice: one presented by the PBX and the other presented by the router itself). It is therefore necessary to ask the operator to disable the presentation of the caller’s number on the part of the router and let the PBX present it.