HOW TO CREATE AN AUTOMATIC RESPONDER WITH THE VOISPEED SWITCHBOARD

ACTIONS OF THE NODE

If the root node provides choices that forward to other sub-nodes (such as in multiple choices such as: press 1 for the sales office, 2 for the technical office, …) it is possible to add sub-nodes by clicking on the name of the root node (the same operation can also be done for each sub-node): a contextual menu will appear that will allow you to add a sub-node to the selected node (obviously you can also delete or modify the selected node). 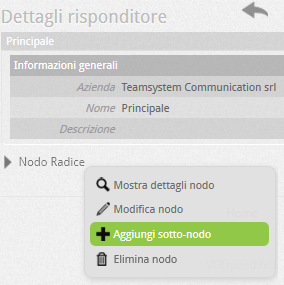 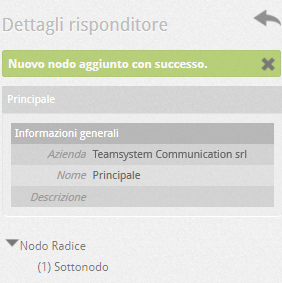 The sub-nodes have the same properties as the root node (see above). However, since the sub-nodes are not directly reachable from the outside, they need a “selection key” to be reached. From the sub-node it is also possible to return to the upper level (node ​​from which the call came) and for this operation the “return key” is used.

To associate the responder with a corporate number, you need to create a routing rule using the wizard.